1. LED lights like those installed on Westside almost always result in complaints about how bright they are.  They have been tested using a gun-like device that measures light intensity and none have recorded a measurement that exceeded standards.
Deflectors – there is discussion about putting deflectors on the lights that will result in the light just hitting the base of the wall.  They are trying to determine the size and angle of deflectors that would result in limiting the light to just Westside and not the adjoining backyards/homes.

2. The contractor has placed black weed barrier in between the sidewalk and the street.  This should really reduce the weed problem in the future. The barrier was put in at the contractor’s expense; it was not a requirement in the city contract.
Stones will eventually be placed over the weed barrier.  The contractor is seeking city approval for the size of the stone to be used.  City has not yet approved the stone size.

3. There is a large box being installed at the west side of Sierrita and Westside.  This will be the controller for the irrigation in the median.

4. Installation of the sidewalk has exposed the foundation of our wall in some locations.  If it remained exposed, it could undermine the wall’s foundation.  The contractor has put in a small wall and filling the area between the new wall and our HOA wall with concrete to protect our wall’s foundation.  It extends about 250 feet west from Sierrita.

5.  Median plantings – unknown when they will be planted.  Our city rep is pushing to have the plantings done within 2 weeks following completion of the road, but there is some question whether she can come up with the money.  If the money is not available now, it could take as long as 2-years for the money to become available.

The construction is proceeding as planned. The project is scheduled to be completed in October 2023.

A car wash will be going in on Golf Course just north of the Wintergreen Apartments.

Circle K on Southeast Corner of Golf Course and Westside

Currently the project design for the Circle K project is on HOLD. When the project moves forward the goal is to be under construction by late summer 2023. The intent is to proceed with a Circle K. It is unknown how long the hold will be for. 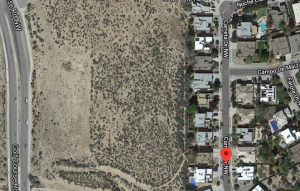 The City of Albuquerque Development Review Board (DRB)  to discuss the Apartments planned for Westside Blvd and Golf Course will be held next Wednesday 7/22/2020 at 0900am. We encourage all residents interested in the project to attend. The apartment project is the second item on the agenda. Here are the logistics for attending the meeting:

Please refer to our previous posts for documentation on the project that we have available.  Click here for most recent post. Use Search term “planned development” to access previous posts.

The following are items relating to the traffic queries for this project:

Grading and Drainage:  Here is the downloadable link to the drainage plan https://1drv.ms/b/s!Ah_cf8IHlL3ogkDpTWEqdjmDVXFo

There is a scheduled meeting with Tierra West regarding the Apartment plans for the lot parallel to Carreta Drive on Golf Course. The purpose of the meeting is to review the development plans for the apartments and have a dialog with the neighborhood residents about their concerns and questions. Please plan to attend if you have interest in the project. Details and minutes from the previous dialog with Tierra West:

END_OF_DOCUMENT_TOKEN_TO_BE_REPLACED

There will be a virtual meeting with Tierra West on Thursday May 21st at 4pm  to review plans for the apartments being proposed for the lot adjoining our neighborhood along Golf Course. See IDO overlay:

The HOA was recently informed of a planned development on the vacant lot located at the northeast corner of Golf Course and Benton Avenue;  the southern half of the vacant lot at the corner of Westside and Golf Course. The Tierra West, LLC Engineer Company held a Neighborhood Meeting with the Executive Committee of the HOA on Tuesday 4/7/2020 to communicate with us the current site layout and plans for luxury/upscale apartments. Please view the lot location for the development and the working site plan below.

END_OF_DOCUMENT_TOKEN_TO_BE_REPLACED

Keep our neighborhood highly desirable.  Volunteer for a committee that interests you.  We are always looking for volunteers!